This autumn, Spirit DH63 Gwenhyfar set sail on the first leg of her longest voyage to date from her home in Guernsey in the Channel Islands to St Lucia in the Caribbean.

A natural island-lover, Gwenhyfar is a 63ft (19m) Spirit Deckhouse with a yawl rig and a penchant for both racing and cruising.  Launched in 2018, she has turned heads at regattas on the UK’s east coast and in Cowes, as well as cruising around the Channel Islands.

Designed with a possible ARC Atlantic crossing and Caribbean season in mind, Gwenhyfar is a Spirit Deckhouse with a raised coachroof to provide protection from the elements and a mizzen sail to stabilise the yacht at anchor in high winds.  Panel windows incorporated into the sides of the coachroof facilitate 270-degree views of the horizon from the chart table and interior helm position.

After 18 months’ racing and cruising in UK waters, Gwenhyfar is now en route to a winter season in the Caribbean ending up at the Antigua Classic Yacht Regatta in April.  Over the coming months, Spirit Yachts will be following Gwenhyfar’s journey, including images and first-hand accounts from her owner and crew of all the highs and lows that come with blue water cruising.  Below is the first instalment in the Gwenhyfar’s Travels series. 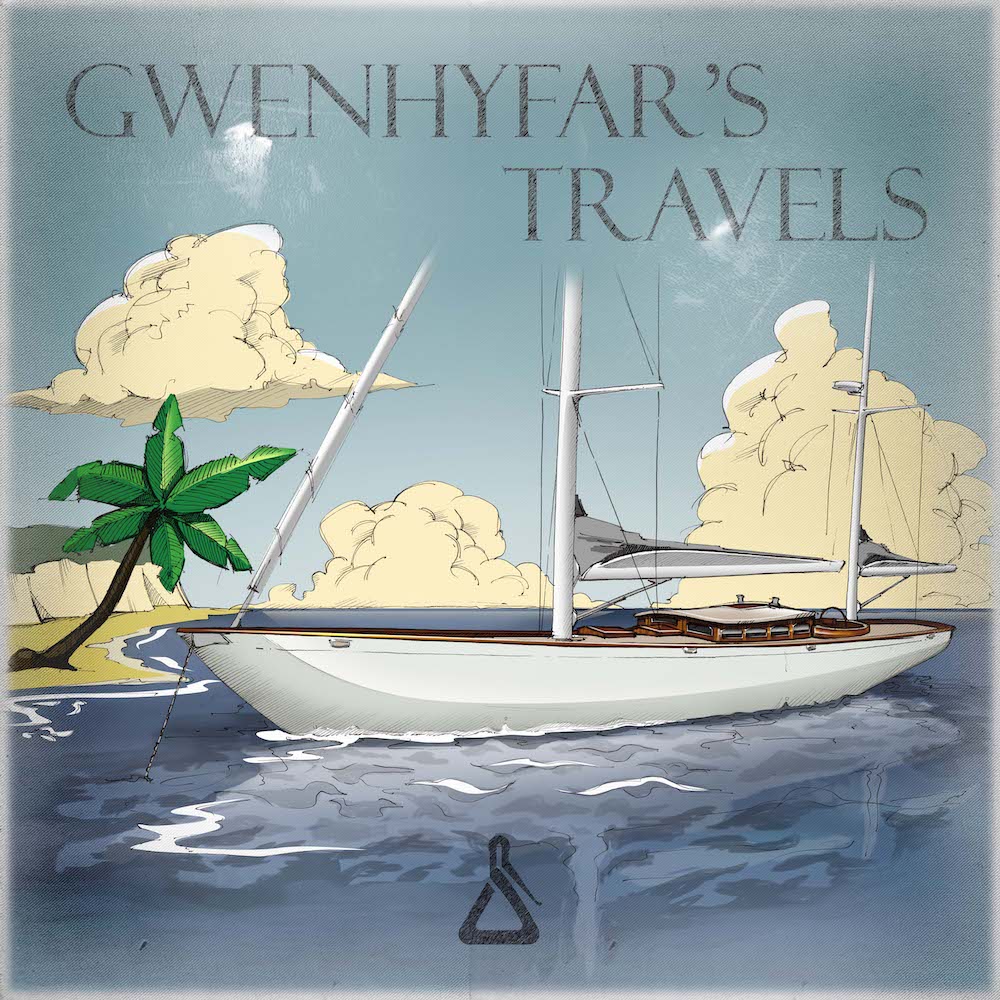 Passage one: double-handed from Guernsey to Portimão, Portugal

Early one mild September morning in Guernsey, Gwenhyfar and her two-man crew cast lines ashore and set a course towards the island of Ushant off the north-west coast of France.  Leg one of the long journey to her final destination of St Lucia had begun.

Despite being 63ft long with a 14ft beam, Gwenhyfar is well set-up for short-handed sailing with all sail controls running aft to the cockpit and a park avenue boom included for ease when dropping the mainsail.  As such, Gwenhyfar’s owner Peter and a member of her regular crew, David, felt comfortable taking on the double-handed trip to Portimão in Portugal.

Overnight brought the first watch and a beautiful contemporaneous sunset in the west and moonrise in the east.  Day two broke with sunshine and a 15-18 knot NNE wind.  The daily log recorded a “best sail configuration of jib, main, mizzen and mizzen staysail, which provided a very comfortable motion”.

From noon on the first day to the same time on day two, Gwenhyfar sailed a total distance of 136nms in light breeze, clear skies and bright sunshine to reach mid-Biscay by lunchtime. 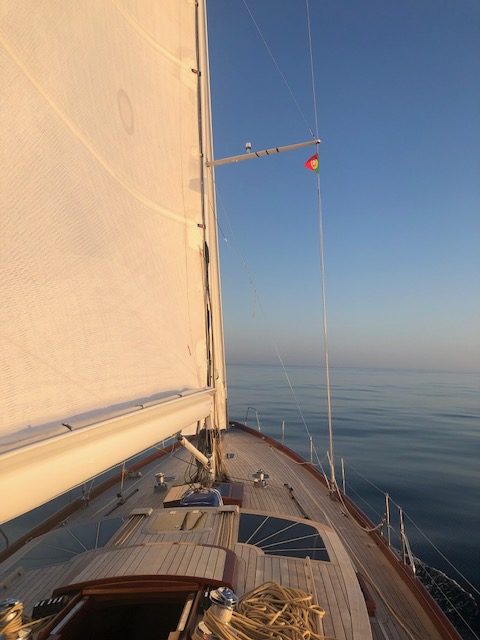 With the winds light, the two merry Guernsey-men were able to set the sails and turn their attention to an equally, if not more important issue: the menu.  On night one, Gwenhyfar’s galley delivered salmon en croute with gratin potatoes and green beans; a civilised start to any journey.   After a relatively quiet night on watch, day two’s breakfast consisted of orange juice and a much-needed strong coffee followed by crushed avocado with lemon juice and black pepper, topped with two poached eggs.  Fish pie and vegetables ensured bellies were full as the two sailors headed into a second night on watch.  No scurvy in sight on the good ship Gwenhyfar.

Back to the sailing… An engine alarm at 10.30am on day three disturbed the peace, but with the Spirit Yachts team relaying advice over the phone the fuel filter was cleared to resolve the issue.

The daily log described the approach to Cabo (or Cape) Finnisterre on day three: “Most of the morning was misty and seas were quite large.  We kept a sharp lookout and had the radar on most of the time as there were lots of fishing boats.  Finally, the mist cleared and revealed Cape Finisterre in all its glory; Monte Facho (the lighthouse-topped mountain on the peninsula) was in full sunshine and the coastline below under a low sea mist curtain.”

Noon on day two to 24hours later on day three saw Gwenhyfar cover a total distance of 148nms, reaching a position just north of Cape Finisterre on the northwest tip of Spain.

After a few days of light winds, the afternoon’s fast and flat-water sail around the top corner of Spain was a welcome change. The strong breeze on the port stern quarter carried Gwenhyfar and her two companions speedily past the beautiful coastal scenery of Cape Finisterre. The daily log described the shoreline as “similar to Scotland; very wild and majestic”.

As the miles went by, the ship’s menu continued to delight with an Indian curry at 6pm on day three.  In the evening, Gwenhyfar was becalmed and all around was eerily quiet. Peter had the early evening watch and was treated to dolphin acrobatics as the sun set over the glassy sea.

A long, damp night saw the fog persist until mid-morning, but spirits were raised with soup and freshly baked ciabatta rolls for lunch.  With not a hint of breeze during the afternoon, Gwenhyfar motored at an economic 1500 revs, producing a steady 6.5knot speed through the flat-calm Atlantic fetch.

Pasta carbonara was served promptly for 6pm supper on day four and the evening went from one foggy watch to the next.  With visibility low, radar and AIS provided essential support for the watchkeepers. Dawn saw Gwenhyfar cross the estuary of Rio Tejo towards Lisbon and for the first time in 600 miles the echo sounder found the seabed at 110 metres.

A passing Portuguese coastal patrol vessel seemed highly suspicious of the luxurious breakfast of scrambled eggs Royale and fresh coffee being served in the cockpit on day five.  Peter and David felt sure they were about to be boarded but instead they were greeted by a rather larger and more pungent visitor.

An enormous splash 120′ to starboard revealed the plume of whale spout; it had obviously caught wind of the delicious breakfast.  The daily log recalled the odour of the spray from their new friend: “Its smell was distinctive; eau de anchovie!”  Intrigued by the lovely Gwenhyfar, the whale followed along the starboard side some 150 metres away for a few miles.  The yacht maintained her 7knots and the whale leisurely swam alongside at the same pace.  Peter and David estimated it was a 35foot sperm whale of approximately 17 tonnes, matching Gwenhyfar’s displacement of the same weight.

At 10pm, Gwenhyfar rounded Cape St Vincente on the last 25mile leg to Portimão. Encounters with unlit fishing boats kept the watchkeepers on their toes, with an uncharted fish farm near Lagos throwing up an unexpected obstacle.  Sails were lowered and stowed as Gwenhyfar headed north up the River Arade to her destination of Marina de Portimão.

The daily log recalled an eventful berthing in the early hours: “Pitch black darkness with only street lighting made a challenging approach. The cheese wire on the reception pontoon was a surprise to the athletic leap of David! He escaped a very near decapitation on our landfall in Portugal!”

Once tied up, a few well-deserved beers sent the tired Guernsey men into a happy slumber.

Until next time on Gwenhyfar’s Travels…