At Spirit Yachts we employ skilled boatbuilders from all over the world, but we’re particularly proud to work with some very talented team members from right here in Suffolk. 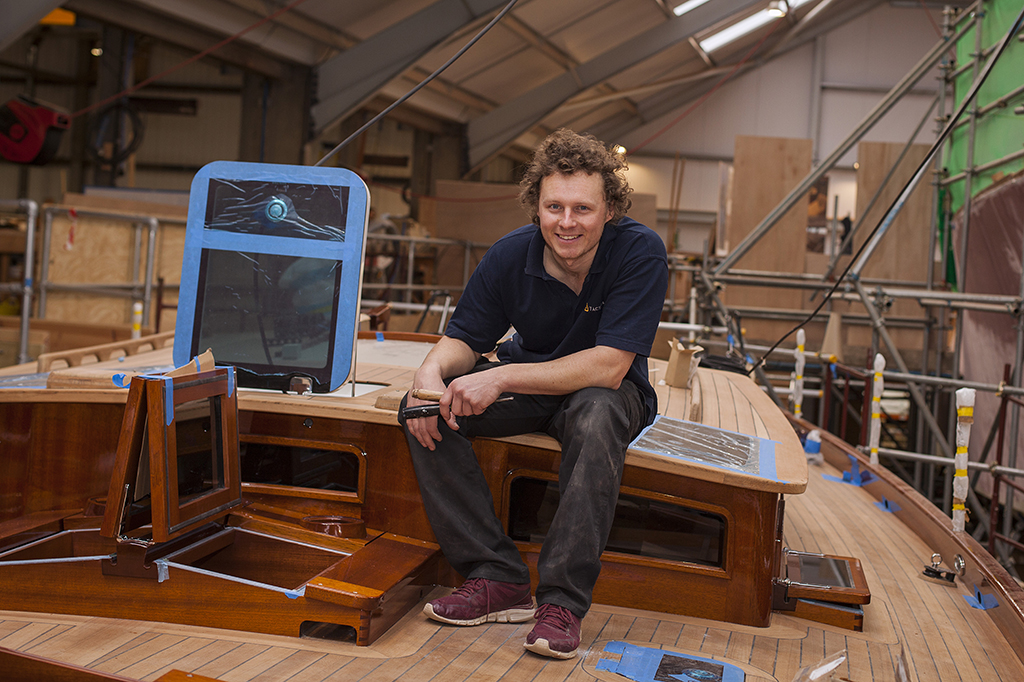 A lifelong passionate sailor, James’ choice of career was set after many happy days spent racing speed boats with his family and time as a member of his local yacht club as a teenager.

“I was fresh out of college when I first started here,” said James, “so it was a huge learning curve and a challenge to meet the high expectations required at first.”

Quickly identified by the Spirit team as a natural talent, James soon settled in. With a flair for deck laying and finishing, James has played a significant role in some of Spirit’s best known builds, including Chloe Giselle and Oui Fling.

“My favourite stage in the build of a Spirit yacht is the detailing and finishing as this is when the yacht takes its actual form and comes to life.

“I take great pride in the small details. Fitting and polishing elements such as personalised winches makes a real difference to the look and feel of a yacht.”

Once the build of a yacht is complete, James often continues working during its commissioning stage to ensure it is as efficient as possible.

“As a keen sailor, I thoroughly enjoy assisting with the commissioning of a yacht. It’s such an important part of every project as this is when a yacht is put through its paces and carefully adjusted to ensure it works at its optimum performance.”

Seeing a yacht through from the creation of its first ring frame to its first hours on the water is particularly special for James and an experience that has yet to be beaten by his time with elegant racing and leisure yacht, Chloe Giselle.

“I worked on Chloe from the beginning, when design concepts were being finalised and was involved at the end, planking the hull, laying the deck and during commissioning. It was such a privilege to then experience all the precision that went into her construction when I was given the opportunity to race her in the Antigua Classic Yacht Regatta last year. A fantastic and unforgettable experience.”

Such is James’ passion for boat-building, he can even be found doing it in his spare time. “I’m actually renovating a 20’ 1958 Swiftcraft powerboat called Jacqueline at home.”

James works as part of an international team at Spirit, with colleagues from Austria, New Zealand, Netherlands, Australia and America.

“It is so special to be part of an expanding team of skilled craftsman from around the world that share my passion for classic yachts. In the beginning, many supported me through the early stages as I learned the ropes. Now I’m sharing my knowledge with new recruits from around the world.”

Friends as well as colleagues, James is part of a team from Spirit that regularly race, competing in the Classic Regatta at Suffolk Yacht Harbour and at the BCYC Panerai Regatta.

“There is a reason that people travel from across the globe to work at Spirit.  We have a unique offering for traditional boatbuilders, and all share that passion for the water. I’m proud every day to be part of a team delivering beautiful and timeless boats.”